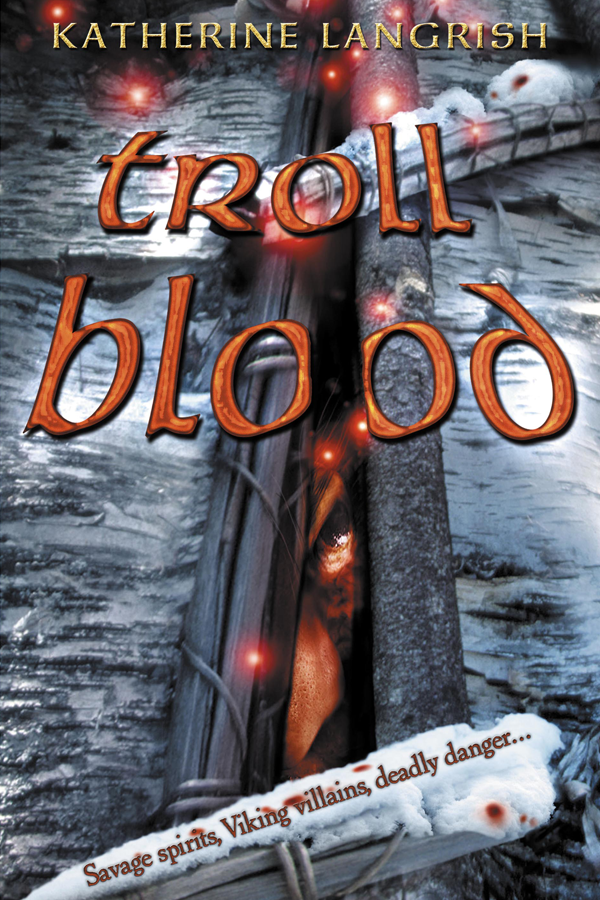 Out where the shining fjord met the pale spring sky Peer saw a large, reddish sail, square-on, and the thin line of an upthrust prow like the neck of a snail.  A big ship running into Trollsvik before the wind. 'Who is it?' Bjorn never took his eyes off the ship. 'I don't know the sail.  Could be raiders. Best not take chances.'

Peer and Hilde are hungry for adventure, so when a Viking longship arrives in their village looking for crew, they decide to set sail for Vinland far across the perilous sea - a place inhabited by Skraelings, a mysterious race of people with dark skin, long black hair and painted faces. But are the ship’s captain and his sword-wielding son really honest sailors? Is the ship haunted? What creatures lurk in the shadows and forests of the new land? And will Peer and Hilde ever return?

The Native American Indians you will meet in ‘Troll Blood’ are based on the Mi’kmaq people of New Brunswick, Canada, who have a rich heritage of amazing stories and traditions. I spent many months researching these, and listed my sources in the American edition. Whenever possible I used ‘primary’ sources: the earliest attributed versions of tales and customs. I am indebted to Dr Ruth Holmes Whitehead, an authority on Mi’kmaq culture, who read the manuscript, and whose book ‘Stories from the Six Worlds’ (Nimbus Publishing, 1988) is a brilliant collection.

For further discussion please see my essay on 'Cultural Appropriation and the White Saviour' at my blog, Steel Thistles

Here is a tale about the jenu, the terrifying ice-giant.

Adventures with a Jenu

A man, with his wife and child, had pitched camp far off in the north-west woods, intending to spend the winter hunting, fishing and trapping. At first all went well, and he brought back plenty of game, which his wife sliced, cured and dried. Then one day while the hunter was out, the woman heard something come crashing through the woods. She looked out and to her horror saw an enormous, gaunt, wild-looking man, naked except for a pack on his back, his hair long and tangled, his lips raw and bleeding where he had hungrily bitten his own flesh. She knew at once it was a jenu, who would eat her and her little son – unless she could trick him.

Instead of running away, she rushed out to meet the monster, pretending to be overjoyed. “My dear Grandfather! How honoured I am! Come in at once and let me cook for you.” The jenu was astonished. He expected people to scream and run when they saw him coming. No one had ever greeted him like this before. “Can this woman really be my grand-daughter?” he thought. The woman ushered him into the wigwam and gave the jenu the best meal he had ever eaten. Concealing her fear, she watched him gulp it down and placed even more food before him. When she heard her husband returning home she excused herself and dashed out to warn him. “There’s a jenu in the wigwam! He’s our guest. Call him ‘Grandfather!’ Be very polite.”

The hunter fell in with the plan. He strolled into the wigwam and greeted the jenu most politely, begging him to stay for as long as he liked. “These must really be my relatives,” thought the jenu. He stayed for weeks, even helping the man to hunt. The woman made him clothes. She cooked for him every day, and one morning he told her to throw away the pack he had brought with him. She peeked in before she did so, and saw with horror a pair of human hands and feet – the remains of the jenu’s last meal. By springtime, the jenu’s raw lips had healed. One day, sitting beside the fire, he began to cough. He coughed and he coughed, until he coughed up a big piece of ice shaped like a little human figure. It was the jenu’s frozen heart. The ice melted in the heat of the fire and the jenu was a jenu no longer, but a real human being. He had been tamed – by kindness.