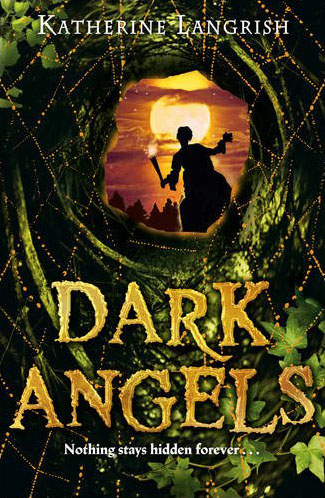 Wolf had heard scary tales about this hill. Stories of blue elf-fires, burning at the mouths of long-abandoned mineshafts and tunnels. Stories of bogeymen and ghosts.

Up on the very top, he had heard there was a road. A road leading nowhere, a road no one used. For if anyone was so bold as to walk along it, especially at night, he’d hear the clamour of hounds and the blowing of horns, the cracking of whips and the rumbling of a cart. And out of the dark would burst the Devil’s own dog pack, dashing beside a black wagon drawn by goats with fiery eyes, crammed full of screaming souls bound for the pits of Hell…

In the wild border country between England and Wales, a boy is on the run. Thirteen year-old Wolf is escaping from the abbey which has been his home and prison for the last eight years. Scrambling up over the wild and haunted ridge known as ‘Devil’s Edge’, he has a strange encounter – and the creature he discovers will change his life for ever. This book is set at the time of Richard the Lionheart, with plenty of supernatural creatures including elves, ghosts, hobgoblins, devils, angels, the Wild Hunt... caves, knights...  The British title is ‘Dark Angels’, but it is published in the US and Canada as ‘The Shadow Hunt’.

Dark Angels / The Shadow Hunt is based on a wide variety of Anglo-Welsh legends, and, as always, I spent a lot of time on background research. I am indebted to far too many books to list here, but two important sources were the 12th century writers Gerald of Wales (especially his Autobiography and Journey Around Wales) and Walter Map, who attended the court of Henry II. Every superstition and belief mentioned in the book is historically appropriate.

There was once a knight of Brittany whose wife died. He was inconsolable and went on mourning for her long after she was buried. Then, late one dark night as he was riding through a rough, wild valley, he saw a company of fairy women dancing. He was about to hurry past the unlucky sight, when one of them raised her head and looked at him strangely. With a thrill of astonished terror he recognised her. Pale and sad though she seemed, it was his wife!

For a moment the knight was frozen, but though his wife did not speak, he saw the appeal in her eyes. He knew such a chance might never come again. Boldly he seized her hand, pulled her out of the dance, and carried her home with him. And his bravery was rewarded, for she lived many more years and they had children and grandchildren who are alive today, and who are known as ‘The Dead Woman’s Sons’.

Herla was King of the Britons long ago. To his wedding came a king of the underworld, shaped like a strange hairy pigmy with a red face, goat’s legs and a long beard. He brought King Herla many wonderful gifts, and made him promise to return the favour by attending the pigmy’s own wedding in a year’s time.

At the appointed date, the pigmy king appeared again and led Herla and his men to a cave in a high cliff. They passed through into a land where the light was neither from sun nor moon, but from a multitude of lamps. At the end of the wedding ceremony, the pigmy king gave Herla and his men more presents of horses, hawks and hunting gear. Then he led them towards the daylight, but as he said goodbye, he gave Herla a small hound to carry and warned him at all costs not to dismount from his horse unless the dog jumped down first.

Once outside, Herla and his men could not find their way. They asked an old shepherd, who screwed up his face with astonishment and said, ‘Lord, I can hardly understand you, for you are a Briton and I am a Saxon. King Herla disappeared into that cave over two hundred years ago, and was never seen on earth again.’

Hearing this, and forgetting the pigmy’s warning, one of Herla’s men jumped from his horse – and immediately crumbled into dust. And from that time on, King Herla and his company eternally wander the hills together… for the little dog has still not leaped down.

Watch the trailer for ‘Dark Angels’.